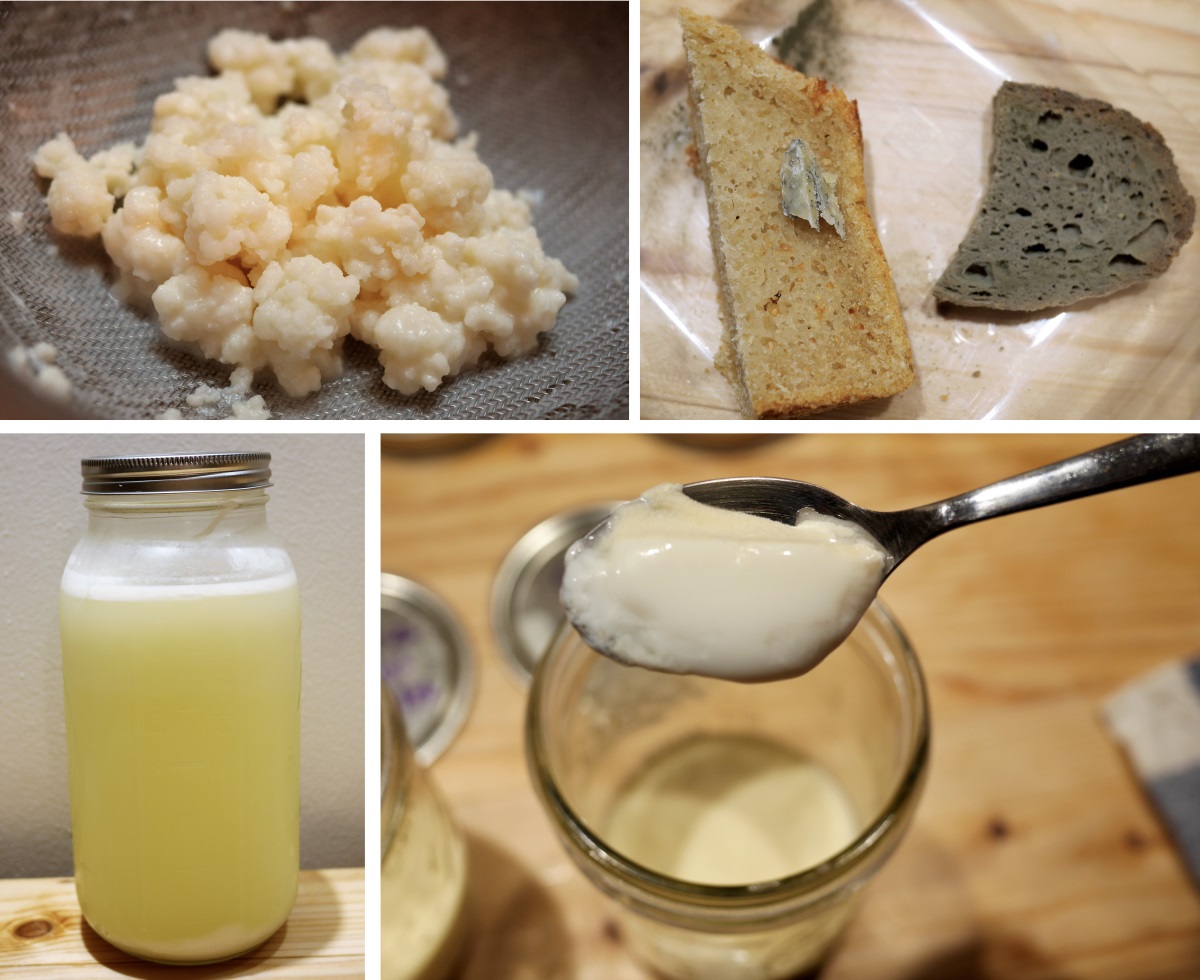 Although we could think that raw milk already holds all the desired micro-organisms to transform the milk into cheese, starter cultures have multiple roles:

So, where do you find starters? I will distinguish two types of starters:

If you are a bit familiar with cheese making, you probably have already encountered cheese recipes involving adding mesophilic culture, thermophilic culture, bacteria linens etc. These cultures of molds and/or bacteria can be bought at cheesemaking supplies, sold in packages in a dehydrated form. And they are not cheap! You will have to spend about $1 per liter of milk. One package of mesophilic cultures usually contains one to three different micro-organisms. Those specific micro-organisms have been selected and cultivated by industrial processes to be very resistant to lyophilisation and to be rehydrated very quickly. Those cultures are very standardized and very poor compared to the microflora of raw milk (100 to 200 different species of micro-organisms2). However, they present two different advantages:

These industrial cultures are now widely used in the dairy industries and farms. But how were the cheese makers doing before those cultures were commercialized?

Some people would talk about natural or wild cultures, but I am a bit skeptical about this term. Natural does not mean much. Humans always have interactions on their environment that be in a laboratory or on the land. The term wild does not seem very appropriate either. Even by cultivating your own starter culture you also select some micro-organisms that can be very different from the organisms you had from the start.

We can identify three different types of non-industrial starter cultures:

Before the invention of lyophilized cultures, cheesemakers could already make very good cheese! It is important understand that bacterias, molds and other organisms are everywhere: in the air, on your skin, on the walls, on furnitures and ustensils… The first starter cultures were probably just in the environment of the cheesemakers after some use: in the vats, cheese molds, etc. This practice is still in use for the production of salers, a cheese from Auvergene, in the center of France3. This cheese requires the use of a wooden barrel.

Another method is to take a piece of the previous production of cheese and add it to the new production. For lactic goat cheesemaking in France it is usual to take a small portion of whey from the previous batch. It is also possible to make a sort of yogourt (or clabbered milk) and use it as a starter (see Parish Hill Creamery approach5).

Some people also start using kefir grains (see this article) as an alternative. This method has been popularized by David Asher (see resources). For people who make cheese at home a few times per month, this presents the advantage of having a source of culture that is easy to take care of.

In France, some cheesemakers working on AOP (protected designation of origin) like reblochon, Comte, have gathered together to build some microbial strains libraries. They generally work very close with research labs. Producers can thus try different types of cultures and adjust their production.

For instance, at the LIP6, an inter-professionals association, you can buy different strains of penicilium roqueforti (the mold that is responsible for blue veins in blue cheeses). Professional making blue cheeses can try different strains and select the one that better suit their needs1) (taste, ripening environment). This is particularly interesting for new cheesemakers to get a regular product more rapidly.

As far as I know I have not found such initiatives in the US.

[4] Comparison of traditional and backslopping methods for kefir fermentation based on physicochemical and microbiological characteristics, D. Kim et al., LWT, 2018